December 2011 introduced new noise codes in Denmark[1]. The 2011 code was in 2015 replaced by a revised code[2] with the only change being that temporary refugee shelters would be permitted within the noise boundary of the turbines. A full overview of the implications of the code can be found in [3].

The code is to a large extent based on the 2007 codes with three significant novelties: 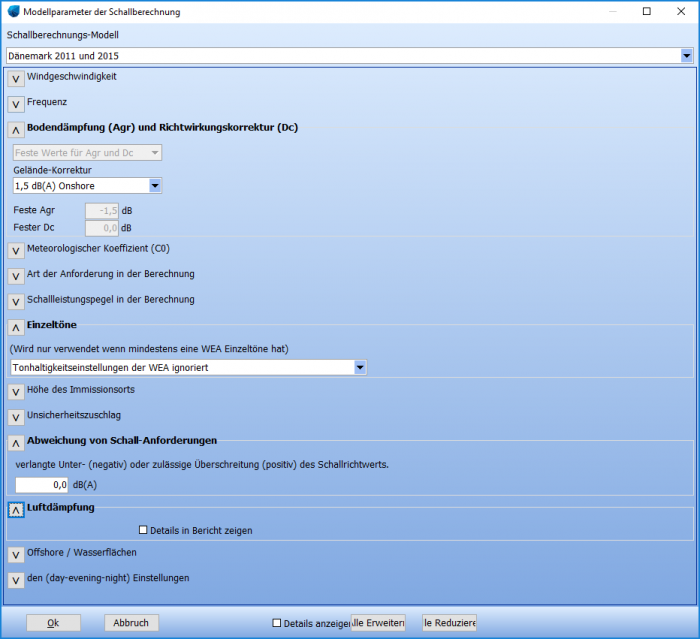 Wind speed: The noise impact must be calculated for two wind speeds: 6 and 8 m/s at 10 m height.

Frequency: Octave band distribution is required for the calculation.

Pure tones: Pure tone penalty is added to total noise from all turbines at receptors where tonality is measured. The penalty is 5 dB. If any turbine used in the calculation has a checked tonality box for one of the relevant wind speeds, the tonality penalty is triggered for all calculated receptors.

Height of immission point above ground level: The receptor height is default set to 1.5m.

Deviation from official noise demand: This field is open to the user.

For the actual procedure of calculating the normal noise and the noise limits please refer to the 2007 codes as documented in previous manual versions as these are unchanged. 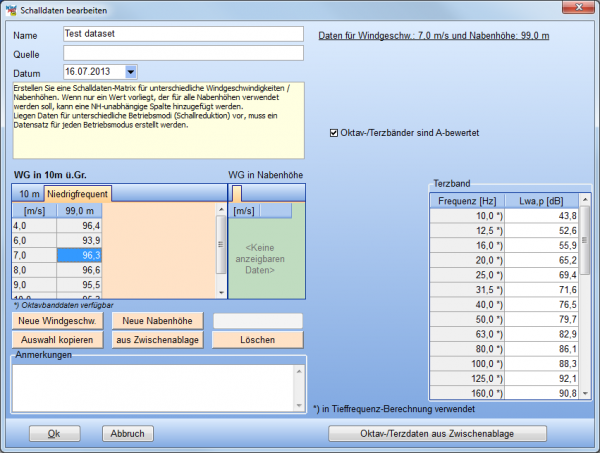 The noise limit for low frequency noise is uniformly 20 dB at any receptor (indoor) at 6 and 8 m/s at 10 m height. In the noise receptor properties, select Danish 2019 Low frequency, which is valid for the 2011/2015/2019 codes. The form allows for two kinds of receptors, Regular dwellings and Cottage zones, however with the 2011/2015 codes all receptors are treated as standard dwellings. 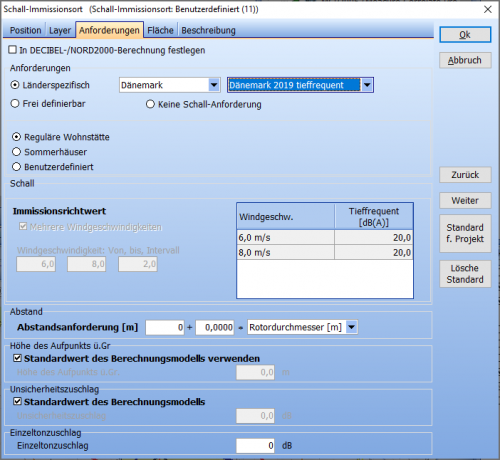 When starting the calculation select as calculation type Danish 2011 and 2015 Low Frequency. The only available choice is whether to calculate for offshore turbines. If that hatch is checked, click the button Edit water areas to select an area object defining the sea. It is so that the low frequency calculation uses special dampings at sea and land and in the 200 m coastal zone makes a transition between the two calculation types. Note that the transition calculation is only for low frequency noise, not normal noise.

Tonality penalty according to the Danish rules is decided at the individual receptor. If a noise measurement at the receptor shows tonality enough to trigger a tonality penalty a new calculation must be done for this receptor adding 5 dB to the cumulative noise from turbines. This tonality is controlled from the NSA object where the 5 dB penalty can be set for the receptor (Pure tone penalty). Tonality setting on the wind turbines are ignored and receptors without the tonality penalty will ignore the tonality.

Due to increased documentation requirements previous practice of using the total noise figure and assuming a generic octave band distribution for existing turbines is now invalid. The noise figures used for existing turbines must be backed up by noise measurement reports for the turbine type and be available at least as 1/1 octave band distributions. If these are not available generic values provided by Miljøstyrelsen must be applied. For this reason when doing a noise calculation with Danish 2011 and 2015 or Danish Low frequency windPRO will for turbine types <=2MW use data from the generic tables from Miljøstyrelsen (Danish EPA) if data at least at 1/1 octave band level has not been selected for the turbine.

In the Decibel report a remark is added to the source noise summary if insufficient data are used or if generic data from the guideline is used.

A specific catalogue of source noise data is provided for existing turbines in Denmark. The data are part of the Source Noise Project (Kildestøjsprojektet) and the database is documented by Grontmij in the document “Støjkatalog over ældre vindmøller i Danmark”, dated June 11, 2014; updated August 28, 2015.

The catalogue requires a special license from EMD. With this license noise records will appear in the wind turbine catalogue labeled KST. The records cannot be edited and are not visible for non-license holders. Each record holds the average 1/1 octave band distribution for the turbine type based on available measurements. In case of large scatter on the result an uncertainty is added to the frequency band.

The database is a realistic suggestion for the actual noise of old, existing turbines and has been been recognized by the Danish EPA as a valid alternative to the generic values of the guideline.