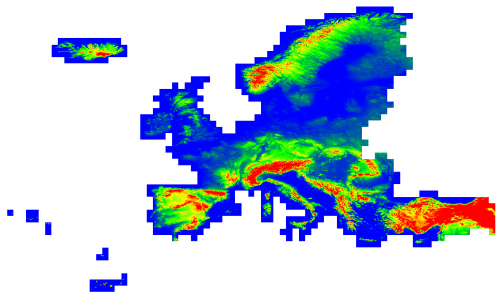 Coverage of the EU-DEM Dataset
The EU-DEM is a pan-European digital elevation model covering European countries. It has a native grid resolution of 1 arc-second (approximately 30 meters). The dataset is void-filled and is created by a fuse of SRTM and ASTER GDEM by a weighted averaging approach. For areas outside SRTM coverage (north of 60 degrees), the dataset is primarily based on Russian topography sources.

The EU-DEM data available in windPRO is version 1.0. We are aware that a version 1.1 is being prepared; but this is still in an un-validated beta-release – along with a license that does not allow for re-distribution of the data. When the data has been finally released, we expect to release it with windPRO. Interested users can access the version 1.1 data from the external source-links below. 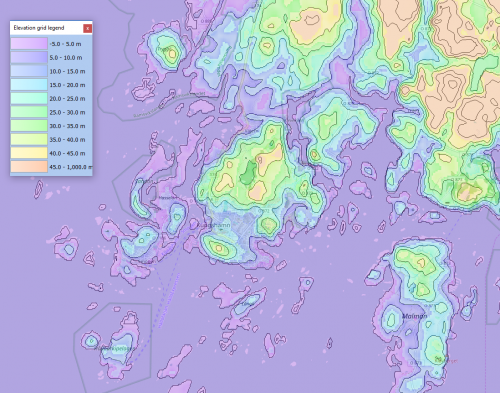 Sample of EU-DEM dataset: At Kungshamn and Smögen, Sweden
A validation report is available from the EU-DEM team documenting an overall vertical root-mean-square-error of 2.9 m. Please note, there is a known issue that the EU-DEM dataset (as measure of ground topography) is less reliable when the terrain slope becomes steeper and the density of the tree cover increases. For more information, please see the link to the validation report below.

For any use of this data, we (EMD) recommend always to validate the height-contours with other data-sources (like high-resolution national topography maps). In addition, special caution should be taken when using the EU-DEM beyond 60 degree north - as the beckground data sources here are less reliable.

The EU-DEM dataset is a realization of the Copernicus programme, managed by the European Commission, DG Enterprise and Industry. The following credit must be displayed when using these data:

Access to data is based on a principle of full, open and free access as established by the Copernicus data and information policy regulation (EU) No 1159/2013 of 12 July 2013. Free, full and open access to this data set is made on the conditions that: