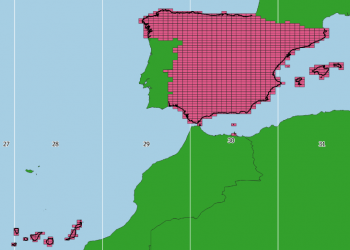 Coverage of the Spanish DEM.

The Spanish elevation models in 5m and 25m grid resolutions are digital terrain models produced by the National Geographic Institute of Spain (Instituto Geográfico Nacional, IGN). Spatial coverage is for the whole of Spain. Most parts of the model data were produced from LIDAR surveys – however data for Ceuta, Melilla and Alborán Island were obtained from optical stereo-correlation methods with a 25-50cm resolution/pixel.

The data are available directly from within windPRO in 5 or 25-meter resolution. The data can be accessed from the online-services in the following objects:

The product belongs to the open data of the National Geographic Institute of Spain. The data have been licensed under a Creative Commons Attribution 4.0 International License. More information can be found in the ministry order which can be accessed from the links below. Please accept the license conditions and use a proper attribution when using this dataset, such as:

More information can be found at: