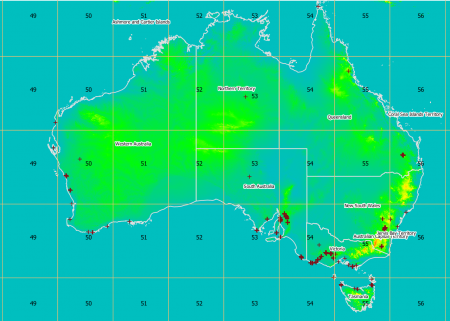 The Australian elevation models in 1-arc-second resolution are digital terrain models (DTM’s) produced by Geoscience Australia. The models are derived from the SRTM 1 second data – with vegetation features being removed using an automated process. Currently, two Australian DTM models are available from windPRO. These are listed below - with their descriptions provided by the reference documentation from Geoscience Australia:

1. Australian DEM – 1 arc second
The Australian DEM represents ground surface topography, with vegetation features removed using an automatic process supported by several vegetation maps. This provides substantial improvements in the quality and consistency of the data relative to the original SRTM data, but is not free from artefacts. Man-made structures such as urban areas and power line towers have not been treated. The removal of vegetation effects has produced satisfactory results over most of the continent and areas with defects identified in supplementary layers distributed with the data and described in the User Guide.

2. Australian DEM-S – 1 arc second (smoothened version)
Australian DEM-S represents ground surface topography, excluding vegetation features, and has been smoothed to reduce noise and improve the representation of surface shape. An adaptive smoothing process applied more smoothing in flatter areas than hilly areas, and more smoothing in noisier areas than in less noisy areas. This DEM-S supports calculation of local terrain shape attributes such as slope, aspect and curvature that could not be reliably derived from the unsmoothed 1 second DEM because of noise.

The data are available directly from within windPRO in 1-arc-second (~30-meter) resolution. The data can be accessed from the online-services in the following objects:

The product belongs to the open data of Geoscience Australia. The data have been licensed under a ‘Creative Commons Attribution 3.0 Australia Licence’ in its version 2 from 2012 - see here.
Please accept the license conditions and use a proper attribution when using this dataset, such as: