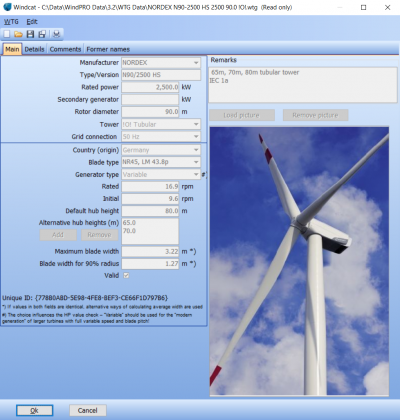 Import of existing turbines in a WindPRO project is a strong and convenient feature that allows the user to validate input and results from a number of the models used within WindPRO. Typically, such data can be directly used in environmental calculations, such as the WindPRO modules covering noise, photomontage and shadow calculations. Where the database also contains energy production data, the data are a valuable resource for calibration of the associated wind model. In order to utilize data from existing turbines in WindPRO, a turbine database needs to fulfill the following minimum requirements:


The #1 - #6 are required for the general application of the database within WindPRO, while the #7 is needed in relation to energy yield estimations. 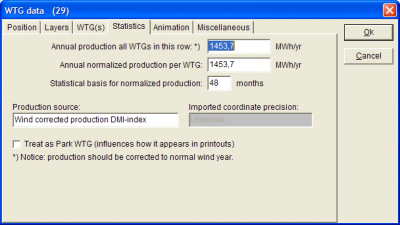 From WindPRO: Statistical Information from a Turbine with Actual Production Data.

Databases on existing turbines are very useful for environmental calculations, where existing turbines might be needed as part of the documentation – and as calibration objects used when setting up the WindPRO camera objects.

Where the database contains production yield data (as in case of Existing Danish WTGs), these data are a very valuable resource for calibration of the expected wind conditions. A recalculation of the expected energy yield (using the WindPRO PARK module) by using data from the nearest existing turbines combined with the wind distribution and terrain modeling will provide an answer as to whether the modeling predicts accurately - or if it needs additional refining and calibration.

In order to access the information on the Wind index Corrected Production (WCP), please right click on an existing turbine in the WindPRO map window. Now open the tab-sheet named "Statistics". Here the production data is shown as well as how many months of data are used when calculating the estimate. You may choose to copy the object data to the clipboard; the numbers for each WTG can be pasted to tools like Excel. This is done by selecting a number of existing turbines in the object list of the WindPRO map window; then right-click and choose copy object(s).

Furthermore, if you have included any existing turbines when you do a PARK calculation, then the WCP is included and compared to the calculated annual energy yield. Here, the “Goodness”-parameter is calculated as the Actual WCP divided by the Calculated AEP.

The following 7 pages are in this category, out of 7 total.