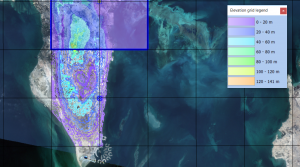 AW3D30 DSM data at Bahrain. Both contour line representation and gridded data are shown.
This page holds a list of some of the major 3rd party commercial providers of high-resolution and high-quality DEMs. Typically, a DEM, DTM or DSM purchased from one of these providers comes with a per-square-kilometer price-tag - along with a minimum purchase area requirement (typically in the order of some hundreds of square kilometres). Most vendors will deliver data in a standard GIS format such as geotiff, xyz, surfer-grid or ESRI-shape-files; these data are easily loaded into the elevation-objects or the line-objecs of windPRO. windPRO will smoothly generate height contour lines - if you choose to purchase data in a raster format only.

Please drop us a line at support@emd.dk if you know of more vendors that you think should be added to the list.

Below a list of commercial providers of DSMs or DEMs.

GAF-AG provides a variety of DSM models in resolutions from 0.30m to 5.0m (with the Euro-Maps 3D dataset) based on Multi-stereo satellite data. The Euro-Maps 3D dataset, which is already available for all of Europe and some other countries, was a part of a DEM-quality study by EMD International presented at the Wind Resource workshop in Brussel 2019. Here, the Euro-Maps 3D model came out with a nice performance at the Norwegian Midtfjellet site (see page 14 in this pdf).

World DEM from Airbus is a DEM with global pole-to-pole coverage. It comes with a 12m resolution and its accuracy is specified at 2m (relative) and 4m (absolute). It is possible to purchase both DSM and DTMs from the WorldDEM databases.

DHI-Gras is a partner in our joint InnoWind project and is a distributor of many DEMs. As such, DHI-GRAS is able to provide guidance on which DEM is appropriate and cost-efficient to use.