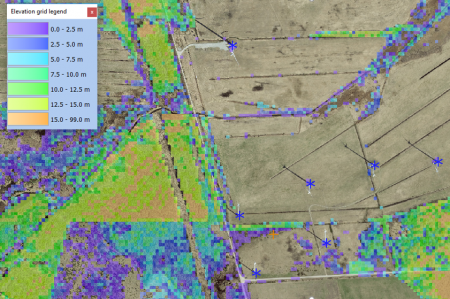 The Estonian Land Board is maintaining maps of canopy heights with Estonian National coverage. The maps are developed using LiDAR scans of Estonia – where 1/4 of the country is being scanned each year. The map of forest heights in windPRO is – as such – based on measurements from multiple years 2012-2015. The Estonian forest heights in windPRO comes with a 10m grid resolution.

Data Applicability and Availability within windPRO

The forest height data are used as input for the dedicated sub-models in windPRO which takes into account the forest impact on the wind flow. This is the displacement height calculator and the Objective Roughness Approach (ORA) tool. Both forest models are available from windPRO 3.2+.

The forest data is accessed from the online-services from the ‘elevation grid object’ with data-type set to ‘Heights above terrain (a.g.l) for elements’.

This data-product belongs to the open data of the Estonian Land Board. The data have been licensed under a ‘License of open data by Estonian Land Board’ – dated 2018.07.01 – or at this PDF. Please accept the license conditions and use a proper attribution when using this dataset, such as:

If you derive data from this dataset or are using it within a published product, then use the notification above (or a simmilar attribution).