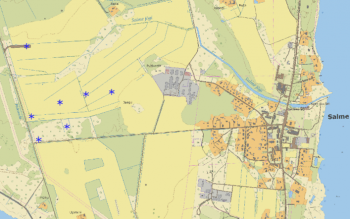 The Estonian Topographic Map is a part of the online map services in windPRO. The topographic maps in 1:10000 resolution were developed by the Land Board of Estonia – and are derived from an updated geo-spatial database. For this scale, coverage is the whole of Estonia. For coarser scales maps are generated from vector maps from EuroGlobalMap.

This map is generated from two sources:

This map is generated from two different sources:

EuroGlobalMap 2019 (vector map)
This product is an open data map from Eurogeographics. The data is released through the EuroGeographics Open Data Licence see here or this pdf-file.

Please accept the license conditions and use a proper attribution of the three sources of data when using this dataset, such as: