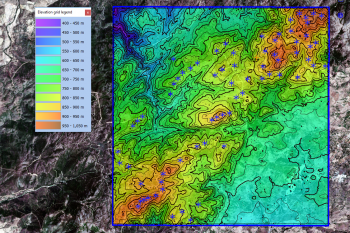 The DTM model for Sardinia – 10 m grid and 25 m contour lines - seen with the 69 wind turbines at the Budduso-Ala dei Sardi Wind Farm. The model shown covers an area of 10km x 10km.

The Italy/Sardinia 10m elevation model is a digital terrain model produced by the Autonomous Region of Sardinia (Regione Autonoma della Sardegna / Regione Autònoma de Sardigna). The elevation data is in a 10m x 10m grid and have a spatial coverage for the whole of Sardinia. The model was produced from a 1:10000 topographic base-map.

Higher resolution data exists for parts of the coastal areas: These 1m and 5 m gridded data may be accessed directly from the geodata-portal of Sardinia: http://www.sardegnageoportale.it

The data are available directly from within windPRO in 10-meter resolution. The data can be accessed from the online-services in the following objects: