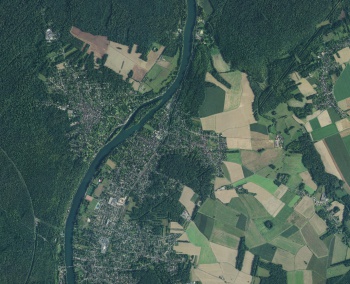 The French Orthophoto Mosaic is a part of the dynamic, zoomable maps in windPRO. The orthophotos were released by the Institut National de l’Information Geographique et Forestiére (IGN) as a part of their BD Ortho datasets. In order to cover the entire France - they come from multiple annual campaigns. The mosaic in windPRO is based on data acessed in medio 2019 - with the BD Ortho 5m data as its source. Pixel size is 5m. Coverage is all departments in metropolitan France - with images from years 2018-2012. Parts of the following overseas territories are also included in this dataset: Guadeloupe, Martinique, Guyane, La Réunion, Saint-Pierre-et-Miquelon, Mayotte, Saint-Barthélemy, Saint-Martin and Wallis-et-Fortuna.

Higher resolution orthophotos can be purchased directly from the IGN.