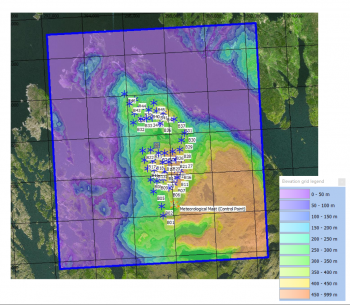 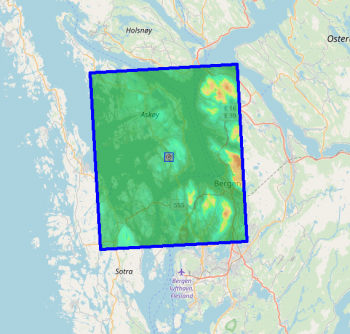 DTM Data in WindPRO - Site near Bergen.
Data source:
"DTM10/DOM10" by Kartverket is licensed under CC BY 4.0.

The national elevation models for Norway (DTM and DOM) are created by the Norwegian national ordnance survey (Kartverket). These data-sets in windPRO come at a 10 meter grid resolution. They are generated primarily based based on laser scans - and are continuously updated. The versions distributed in windPRO by EMD were downloaded during late August 2018. Currently, we distribute the digital terrain model (DTM10) and the digital surface model (DOM10)

The data are available directly from within windPRO in 10 meter resolution. As a part of the processing of the DTM10/DOM10 elevation data from our EMD server, the user has an option of choosing whether the data downloaded should be received as either raw gridded data or converted to height contour lines. In order to use the data for energy yield calculations, the data must be converted to contours. The data can be accessed from the online-services in the following objects:

The data are distributed according to the terms of use for open and free geographical data in Norway. The license is Creative Commons by Attribution 4.0. As stated in these license conditions, please take proper care to add an attribution in order to acknowledge the source of information and any changes done to the data. This could be done by adding the following statement to your report-picture or map: