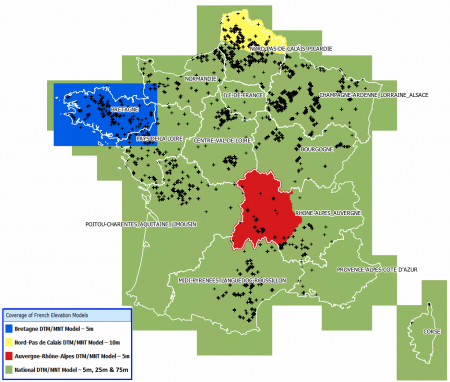 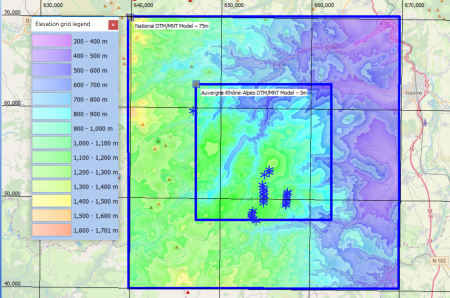 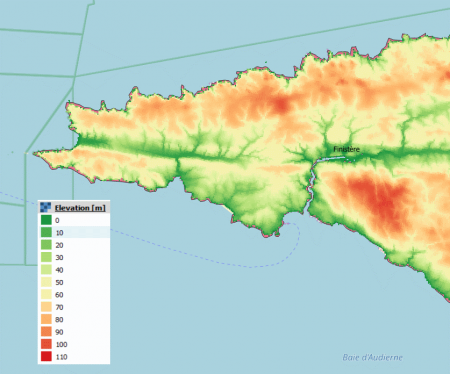 A number of French digital terrain models DTM’s (MNT - Modèle Numérique de Terrain) are available with windPRO – one covering the whole of France in 75m grid resolution – and others from selected administrative regions in higher resolutions, typically 5m grid or 10m grid. The French DTM datasets are freely available for windPRO users with an active subscription. Currently, the following French elevation models are available:

1. National DTM/MNT Model – 75m:
This model is a medium scale (75m grid resolution) version of the national elevation model of France (BD Alti). The model is released from the Institut National de l’Information Geographique et Forestiére (IGN). It is based on digitization of maps and stereo-imagery with data from years 1987-2001. Higher resolution models can be purchased from the IGN. Read more on BD Alti in this pdf-document (in French).

The data are available directly from within windPRO and may be accessed from the online-services from the following objects:

These products belong to the open data of France. Please use the following attributions when using one of the datasets:

Unless otherwise stated, these data have been released under the French License Ouverte / Open License – a license used for open data from the State of France. The license is designed to be compatible to be compatible with Creative Commons Licenses, Open Government License (UK) and the Open Data Commons Attribution License read pdf here. It is required that the source of information is mentioned when using these data – see above.