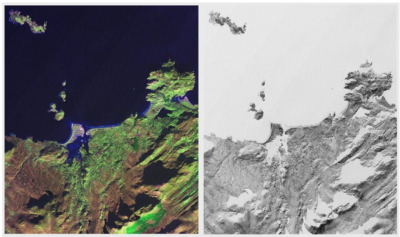 Many of the free satellite photos come from the Landsat series of satellites, where the images of an area are recorded in at different wave lengths (that is not in true colors). The satellite carries a camera instrument that records images of the Earth using different filters (wave lengths). The Landsat TM (thematic mapper) instrument on Landsat 5 used seven different bands, each sensitive to the different parts of the reflected solar energy spectrum. It is possible to convert individual bands into either true color pictures or artificial (false) colour pictures. The option of using artificial color pictures is widely used within the field of remote sensing, when studying, for example, changes in global vegetation, pollution, etc.

In WindPRO, two versions of the GeoCover Images are available:

The source material remains the same for both map types, only the coloring scheme is different.

It has been reported for locations in central Germany (around 9°E / 52°N) that the GeoCover maps show an offset of around 5 km there. This is not a smooth transition from "well-fitting" to "displaced", but either your maps do have that displacement or they don't. It cannot be ruled out that this applies to other areas as well, so you're advised to check the downloaded maps against a dataset with known quality, e.g. OpenStreetMap. As it is a dataset from an external source, EMD has no means to correct this.

NASA has made the orthorectified Landsat scenes freely available to the public, but holds the copyright together with USGS.
There is no restriction on the use of Landsat GeoCover imagery for research, educational or commercial purposes.

You may find more information about this dataset at the following internet addresses: