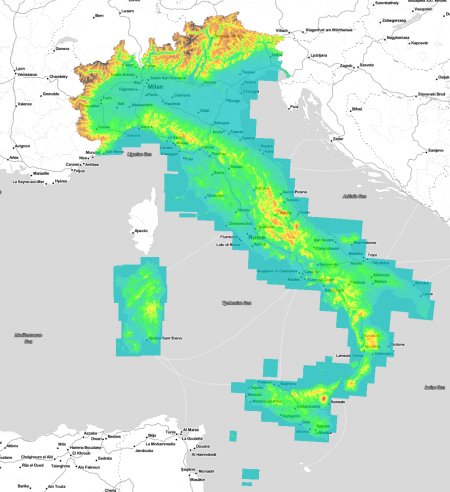 The DTM model for Italy – Coverage for the Italian Territory 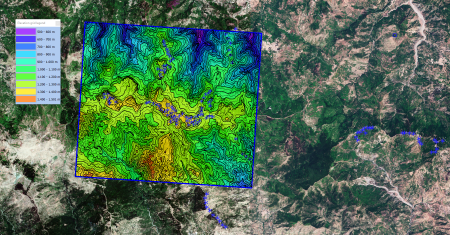 The TINITALY model for Italy – at work at the wind farms just north of Randazzo, Sicily, Italy. 10 m grid and 25 m contour lines - the model shown covers an area of 10km x 10km.

The Italian Elevation Model - TINITALY - is a seamless digital elevation model that covers the territory of Italy. It is produced by Tarquini et al - using a Triangular Irregular Network (TIN) approach. The model was first presented in 2007; it is built from separate elevation models from each of the administrative regions of Italy, please consult (Tarquini, 2007) for further details on data sources. Grid resolution is 10m and this model is released from the National Institute of Geophysics and Volcanology / Istituto Nazionale di Geofisica e Vulcanologia (INGV). As a part of the TINITALY dataset evaluations (Tarquini et al, 2017), the authors reported the TINITALY DEM to outperform other sources:

"The TINITALY DEM is currently the DEM having the highest resolution and the lowest error (on average) covering the whole Italian territory.... and it represents, at a country or (trans-)regional scale, a substantial step forward with respect to global DEMs such as the ASTER DEM and the SRTM DEM...".

The data are available directly from within windPRO in 10-meter grid resolution. The data can be accessed from the online-services in the following objects:

TINITALY is published with a CC-BY-4.0 license. Please use the following attribution when using this dataset: