This appendix describes the fatigue design load cases, which should be considered according to the wind turbine standard IEC 61400-1 ed. 3 (2010) along with the workflow for determining fatigue loads.

The design load cases in IEC 61400-1 ed. 3 (2010) are developed in order to represent all significant design situations during a wind turbines design lifetime in both ultimate (extreme) and fatigue loading.

The design load cases which should be considered for fatigue loading are listed in the table below (see IEC 61400-1 ed. 3 (2010)[1] for abbreviations). In LOAD RESPONSE, only design load case 1.2 is considered, since this normally is the most dominant design load case and highly dependent on the site specific wind climate parameters. However, the minor contributions from the other DLCs may be included via the DLC Other option from windPRO 3.4. This contribution should represent the expected combined fatigue contribution within the design lifetime of all the fatigue DLCs other than DLC 1.2. IEC61400-1 ed. 4 provides guidelines for the number of expected start-ups and shut-downs.

Wind turbine loads are normally determined based on aero-elastic simulations of the wind turbine during the different design situations / load cases. The aero-elastic model needs, in general, input concerning:

The number of cycles to failure is normally determined based on a SN-curve, which, depending on the material, can be more or less complex. However, in order to secure an easy interaction between the aeroelastic model used to determine the overall structural loading on all wind turbine components and the finiteelement models used to determine the local stresses for specific structural details, a linear SN-curve is normally used. The linear SN-curve describes the relationship between the stress range Δσ and the number of cycles to failure N, where, also, the Wöhler exponent m is introduced corresponding to the negative slope of the SN-curve. Note that the term “linear” SN-curve refers to linear in a log-log plot (see the equation and figure below). 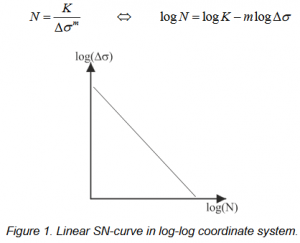 The total damage D from the individual stress cycles extracted by rainflow-counting is normally determined by Miner’s rule for linear damage accumulation proposed by MA Miner[4]:

For mechanical components, the fatigue stresses normally occur due to the interaction between different gears. This fatigue load is often characterized by the Load Duration Distribution (LDD), which describes how long time the stresses are at a given level (see, e.g.[5]). The LDD is also dependent on the sampling frequency f and the number of time steps in the simulations with a given stress level. It is noted that the term Wöhler exponent also is used for the Load Duration Distribution, even though the same relationship to the linear SN-curve not is present.

The response surface methodology used in LOAD RESPONSE is formulated based on Central Composite Design, which was first proposed by Box & Wilson (1951)[6]. Central Composite Design was initially developed to assess second order effects in a response, where interaction between different variables was present. This is often the case for wind turbine response. For each sensor in LOAD RESPONSE, a response surface is fitted at each wind speed bin in order to assess the fatigue loads accurately. In design load case 1.2, the following four wind climate parameters (variables) influence the fatigue loads:

The response surface methodology used in LOAD RESPONSE is, therefore, four dimensional. The figure below shows the principle in establishing the response surface for a two dimensional case using central composite design. The black point refers to the reference point (normally, the wind conditions for the IEC class), the blue points refer to variations of single wind climate parameters (variables) in order to estimate second order effects, and the red points refer to variations of several wind climate parameters, simultaneously, in order to estimate their interaction. 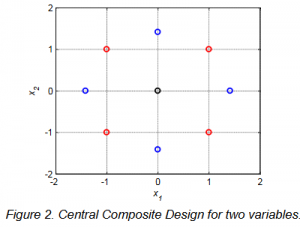 In order to setup the four dimensional response surface in LOAD RESPONSE, aero-elastic simulations for 25 combinations of the four wind climate parameters are needed at each wind speed bin. The response surface central composite design has been selected for LOAD RESPONSE, because it provides a reasonable balance between accuracy and the required number of simulations. The regression model fitted to the response at the individual wind speed bins using linear least squares regression, where x denotes the wind climate parameters and β0, βi and βij are regression parameters.

where w(Vhub) is the weight factor determined from the wind speed distribution.

The estimated fatigue loads are presented in the following three ways in load response:

The value of the damage equivalent load or load duration distribution is shown directly in LOAD RESPONSE for each sensor when calculations are performed for specific wind turbines implemented by manufactures. The load index is the main result, both for specific and generic wind turbines. The load index for each sensor is defined as the ratio between the fatigue load (DEL / LDD), estimated based on the site specific wind conditions, and the fatigue load (DELref / LDDref), estimated based on the wind conditions for the considered IEC class.

A load index <100% shows that the site specific fatigue loads are less severe than the fatigue loads for the IEC wind climate conditions. The fatigue lifetime is also determined for each wind turbine component relative to the assumed design lifetime, which, for the generic wind turbines, is assumed to Tturbine = 20 years. The fatigue lifetime will, therefore, be larger than 20 years for sensors with a load index below 100% % (below shown without DEL Other contribution).

It is noted that the fatigue lifetime does not consider other material degradation phenomena such as abrasion or corrosion.