The CFSR is a third generation reanalysis product. It is a global, high resolution, coupled atmosphere-ocean-land surface-sea ice system designed to provide the best estimate of the state of these coupled domains over this period. The CFSR includes (1) coupling of atmosphere and ocean during the generation of the 6 hour guess field, (2) an interactive sea-ice model, and (3) assimilation of satellite radiances.

EMD holds a subset of the CFSR data in different spatial resolutions.

All have a global coverage over land masses which is extended about 50 km into the sea near coastlines. The temporal resolution is 1 hour. Currently all data is available in WindPRO, but caution is advised when utilizing the CFSR-E data set. (See "Data Experiences below")

Note that the CFSR-E dataset is actually a version of the CFSR that has been extended with data from CFSv2. According to NCEP, this can be regarded as a 'seamless' extension (however see our experiences below). 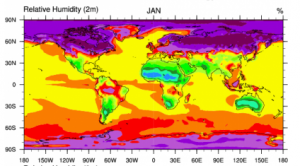 The CFSR global atmosphere resolution is ~38 km (T382) with 64 levels. The global ocean is 0.25° at the equator, extending to a global 0.5° beyond the tropics, with 40 levels. The global land surface model has 4 soil levels and the global sea ice model has 3 levels. The CFSR atmospheric model contains observed variations in carbon dioxide (CO2), together with changes in aerosols and other trace gases and solar variations. With these variable parameters, the analyzed state will include estimates of changes in the Earth system climate due to these factors.

CFSR data on the 0.5 degree grid is commonly available within WindPRO with a time-tag of 1-2 months. This is due to the processing time of the data at NOAA and the subset-processing at EMD. When the data has been processed at EMD, then the following parameters are available from within the online-dataservices WindPRO.

Comparing 7 years of CFSR data vs. MERRA and NCEP/NCAR Reanalysis data. Monthly average wind speeds are shown. At this offshore site in Denmark, no obvious divergence of datasets is seen.

Comparing 7 years of CFSR data vs. MERRA and EMD-Conwx data. Monthly average wind speeds are shown. At this mountainous site in Norway, an obvious divergence of datasets is seen.