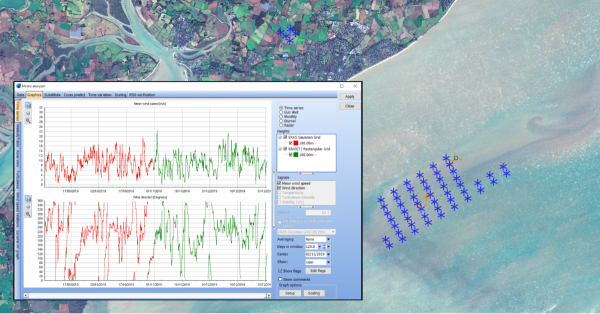 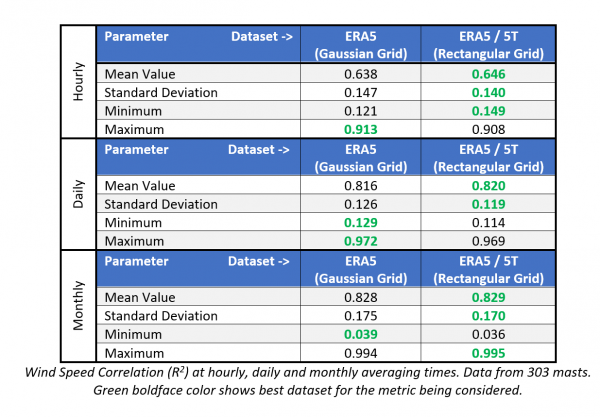 
Why an additional "ERA5(T) Rectangular Grid" dataset in windPRO?
The first ERA5-based dataset in windPRO was released in summer 2017 and now named ERA5 Gaussian Grid. The original ERA5 data is based on model output from a reduced gaussian grid, which has been a recommended first choise for many modellers and analysts. Unfortuantely, the newly released ERA5(T) data from December 2019 (preliminary data, but updated with a shorter delay) is currently unavailable for the reduced gaussian grid. As such, ERA5(T) data is currently only offered by ECMWF on an interpolated, rectangular geographical grid in a 0.25x0.25 degree resolution. From our understanding, it is due to current technical limitations in the data-distribution systems at ECMWF and CDS. The windPRO "ERA5(T) Rectangular Grid" dataset is created in order to provide the most recent and up-to date data in windPRO - with both ERA5 data and ERA5(T) included.

From Preliminary ERA5T to Final ERA5 Data
ERA5(T) is initial release data with availability 5 days behind real time. ERA5 is final data with availability 2-3 months behind real time. In the "ERA5(T) Rectangular Grid" dataset of windPRO, data from ERA5(T) and ERA5 are seamlessly merged, with ERA5(T) data being the most recent 3 months. Users can easily verify which data is ERA5 or ERA5(T) as the windPRO-data is flagged by the 'era5t' binary parameter - see the table below. In the rather unlikely event that ECMWF detects serious errors or flaws in the ERA5(T) data, the final ERA5 data could be different to the preliminary ERA5(T) data. If corrections are applied then users will be notified by ECMWF (via their mailing list and forum) and by EMD (by wiki and direct email). ECMWF[1] writes the following on the likelihood of errors detected in the ERA5(T) dataset: "Based on experience with the production of ERA5 so far (and ERA-Interim in the past), our expectation is that such an event would not occur more than once every few years, if at all."

Performance: "ERA5 Gaussian Grid" vs "ERA5(T) Rectangular Grid
EMD has benchmarked the two datasets: the native "ERA5 Gaussian Grid" and the interpolated "ERA5(T) Rectangular Grid" to investigate any performance differences in the two quite similar datasets. The benchmark is made against high-quality wind-speed data from more than 300 tall meteorological masts with a global distribution. As the evaluation-metrics, we consider the wind-speed corelation (R2) at different averaging times: hourly, daily and monthly. Our benchmark shows, that the two datasets correlate equally well against the local meteorological mast data, with a slight advantage to the interpolated "ERA5(T) Rectangular Grid" dataset - see the table below. Since small differences are seen, we do not recommend to mix ERA5 data originating from different grids as inconsistencies then might occur. 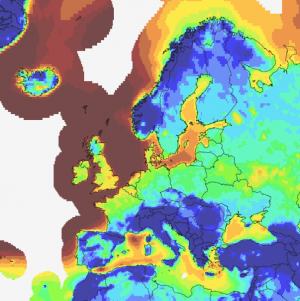 EMD extracts a focused subset of climate-parameters from the ERA5 datasets - with special emphasis on renewable energy and wind-energy modelling. When the data have been processed at EMD, then the following parameters are available from within the online-data services within windPRO.