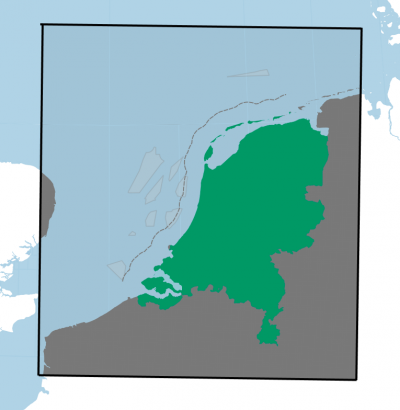 KNMI-KNW North Sea Winds is a high resolution mesoscale dataset that is modeled and provided by the Royal Netherlands Meteorological Institute, KNMI. The dataset has a spatial coverage that holds the Netherlands along with its nearby North Sea area, see the black rectangle in figure to the right.

The KNMI-KNW wind atlas is developed using the HARMONIE mesoscale model – and it uses the ERA-Interim reanalysis dataset as its boundary data. The spatial resolution is 2.5km – and data from the 31960 individual nodes are available in windPRO as hourly time series. The dataset holds data that dates back to 1979. The vertical profile of wind speed was calibrated against the 200 m tall Cabauw measurement mast to obtain a single wind shear correction coefficient; this correction was applied by KNMI throughout the whole dataset.

Usage Note: The KNMI-KNW dataset is discontinued from August 2019

2019-05-29: ERA-Interim data will not be available from august 2019 - so KNMI will cease to produce the KNMI-KNW atlas. The new Dutch Offshore Wind atlas is available for years 2007-2018 - however - regular (monthly) updates of this datasets is still uncertain - as KNMI currently has no funding for maintaining the dataset (but are working to find options to extend the data).

2019-02-07: An alternative dataset – the Dutch Offshore Wind Atlas – has been released from KNMI during late 2018. This improved datasets provides a climatology based on 11 years of data (2007-2018) in spatial resolution of 2.5km. The weather model used is HARMONIE-AROME driven by ERA 5 data. Data and more information can be found here: www.dutchoffshorewindatlas.nl. 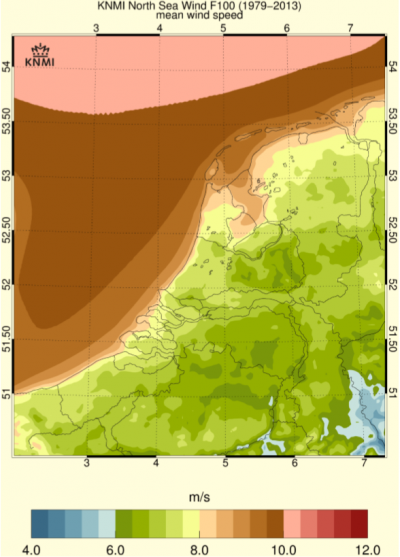 Mean Wind Speed 1979-2013 for KNW
This dataset can be accessed from the most recent version of windPRO given that you hold an active service agreement and a license to the following modules:

This dataset is updated on a monthly basis by KNMI – the data is available with approximately 3 months delay as defined by ERA Interim’s availability. When new data has been made available by KNMI it is processed by EMD, then released as a part of the windPRO online datasets.

The following parameters are available from the KNMI-KNW mesoscale dataset

This dataset has been released from KNMI as free and open dataset. The license referred is CCO 1.0, which can be accessed here:
https://creativecommons.org/publicdomain/zero/1.0/deed.en

Credits and Acknowledgement: Royal Netherlands Meteorological Institute, KNMI for the release and maintenance of the KNMI-KNW dataset.