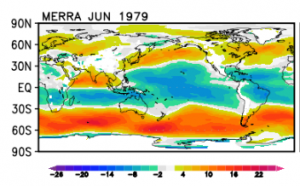 The MERRA dataset has been discontinued by NASA that provides the data. So the Feb. 2016 data will be the last of MERRA. As far as we know the problem was that some of the data sources used to model MERRA would go out of operation so therefore it was not possible to keep updating the dataset.

As a replacement for MERRA they (NASA) decided to provide a new dataset, MERRA-2 Data which is already available in windPRO 3.0 (and newer). According to NASA the MERRA-2 Data dataset has some advantages compared to MERRA-1 and most importantly, it will be updated going forward. At EMD we have done some tests on the 2 datasets and we see a similar quality, but it is hard to compare directly as they use different grids so you can't find download points at exactly the same location.

MERRA is an abbreviation for Modern Era Retrospective-Analysis for Research and Applications. The dataset originates from the Global Modeling and Assimilation Office of NASA / Goddard Space Flight Center. The MERRA analysis are being conducted with the GEOS-5 Atmospheric Data Assimilation System(ADAS).

For detailed information about the dataset, see the External links section below.

The model grid is 0.5 degree latitude and 2/3 degree longitude.
It holds 1 hourly values in a period from 1979 until present.
Coverage is global for land-areas and coastal regions.
Offshore coverage is only to be expected up to approximately 50 km from the coastline.

MERRA data is commonly available within WindPRO with a time-lag of 1-2 months. This is due to the processing time of the data at NASA and the subset-processing at EMD. When the data have been processed at EMD, then the following parameters are available from within the online-data services within WindPRO. Please note that the displacement height is the height at which the log wind profile projects the wind to be zero. See more at the MERRA-FAQ.

The wind speed / direction signals are averaged over one hour with the time stamp in the middle of that hour. We advise to not put too much emphasis on this - be aware that this data is not comparable to a wind measurement at a specific point and time. It is referring to average wind conditions in a cell of several thousand square kilometers (e.g. at 50° latitude roughly 50 x 50 km), and time offsets of up to +/- 120 minutes compared to measured data are rather common. When using MERRA for long term correction, we recommend a visual comparison of the data with the measurement. If there is a visible shift, try different time offsets for MERRA and check whether this improves the correlation. We do not recommend to build 1-hour mean values from your measured data for long term correction with MERRA, as the disadvantage of a loss in energy content by averaging outweighs the advantage of comparing equal periods. This is, however, a matter of discussion.

50 m temperature records are now available in WindPRO for MERRA downloads after 06/2014. This 50 m temperature is modelled from the 2 m native temperature data - by invoking the global temperature lapse rate from the Standard Atmosphere Model (essentially 0.65 degree C per 100 m, i.e. an adjustment of 0.312 degree C from 2 m to 50 m). For completeness, please note that any height difference due to the displacement height is presumed negligible due to other model components and has therefore not been taken into account. For information on the standard atmosphere model see here.

Generally, the MERRA data is always considered when seeking for candidate reference wind datasets for a particular site. Correlation between local measurements and MERRA data is often high, see the figure below. For his particular study made in 2010, MERRA data was compared against NCEP/NCAR, 3Tier (commercial data) and SYNOP data. 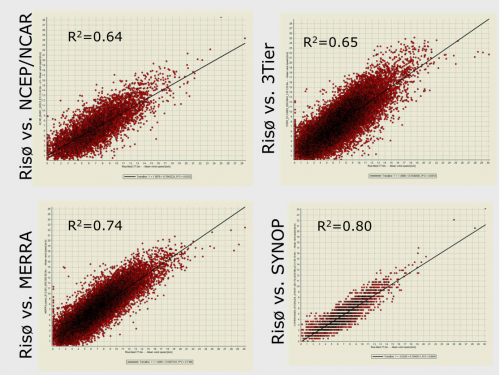 MERRA data downloaded in WindPRO before April 21, 2014 may contain up to 10 single-day gaps in the years 2000-2012. If the data is processed solely in WindPRO, this is no problem due to the small amount of missing data and the distribution over the years. If the data is to be processed outside WindPRO, it may however lead to problems synchronizing data from different sources. In these cases, it is recommended to re-download the required datasets.

Credits: The Global Modeling and Assimilation Office (GMAO) for the MERRA-analysis and the GES DISC for the dissemination of MERRA.