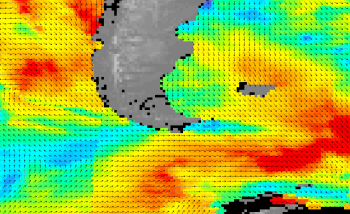 QuikScat Map of Wind Speeds and Direction in the Cape Horn Region.

QuikScat is an offshore wind dataset based on remote sensing from a satellite instrument.

The rotating antenna on the QuikScat satellite malfunctioned at the end of November 2009. While the satellite was designed with an expected lifetime of 5 years, it was actually in operation in 10 years. Currently, there are no plans for a replacement satellite. A new dedicated offshore wind dataset is available though, through the Blended Coastal Winds.

The QuikScat wind data are derived from a remote sensing microwave scatterometer that is mounted on the QuikScat satellite; the satellite was launched in June 1999. The scatterometer is a special type of radar that is used to analyze the roughness of the sea. This fine scale roughness is highly correlated to near-surface winds and directions – and as such it is possible to infer the wind conditions based on the scatterometer data.

The QuikScat dataset at EMD currently holds 10 meter wind speed derived from the fine scale surface roughness of the sea surface. According to the documentation on the QuikScat data, the wind corresponds to an 8-10 minute averaged wind speed.. The temporal coverage is at maximum 2 times a day, but with a number of gaps with data missing due to problems, such as the instrument being turned off. 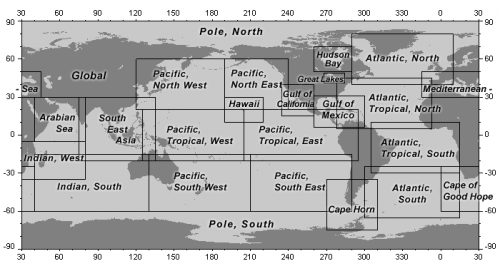 Spatial Coverage of the QuikScat Dataset

The accuracy of this method is decreased during rain events or during sea-ice events. When receiving the data from WindPRO, then all data are enabled by default. If you do not want do use the wind data that occur during rain events, then you will have to manually disable those data. The data files received from WindPRO hold an extra column named ‘rain_flag’; this column is easily applied for this purpose (but it is a manual operation!). An example of the QuikScat data is shown in the figure below.

Homepage for the QuikScat data: http://www.ssmi.com/qscat/.