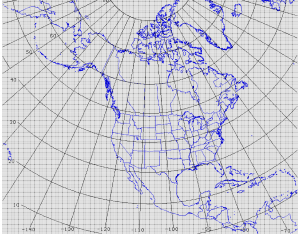 The NCEP 221 Grid used in the NARR model
The NCEP North American Regional Reanalysis Data is a high resolution high frequency assimilated dataset covering the North American region. The model area is shown in the figure to the right.

The spatial resolution is 32.4 km, resulting in a total of 96673 nodes covering the area. The temporal resolution is 3 hours. The dataset covers a period from 1979 until the present moment. The dataset assimilates data from rawinsondes, dropsondes, pibals, aircraft, selected surface stations and geostationary satellites.

The full dataset consists of more than 400 climate variables which – when stored in NetCDF files – require storage of about 30 Terra Bytes. At EMD we hold and distribute a subset of the NARR data. The raw data is processed by EMD as the original data holds the vector components for the wind speeds only (U and V – winds). We convert the raw data into a format appropriate for use with wind turbine applications, i.e. wind speed and direction instead.

The NARR dataset at EMD currently holds 10 m and 30 m wind speeds as well as 2 m temperature data. An overview of the data is given in the tables below. Please refer to these tables when interpreting the headers in the files received from the EMD server.

In the figure below, data from the NARR dataset is compared with local data from a 30 m sensor mounted on a local mast in Fargo, ND. Also shown is the NCEP/NCAR Reanalysis Data with its 6 hour temporal resolution. 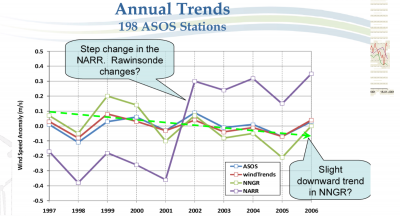